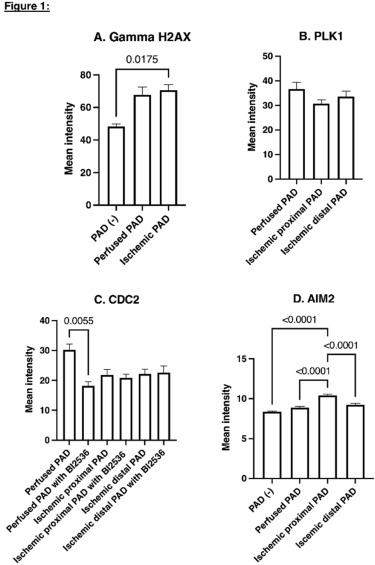 We showed that myoblasts (Mb) in peripheral arterial disease (PAD) differentiate poorly and have evidence of inflammasome activation. Absent-in-melanoma 2 (AIM2), an inflammasome and mediator of pyroptosis, binds damaged DNA, which also triggers the G2/M DNA damage checkpoint including CDC2 and its regulator, polo-like kinase 1 (PLK1). Dysregulated checkpoints can cause faulty replication, but a link between checkpoint function and AIM2 is not known. We hypothesize that AIM2 expression in PAD Mb correlates with increased DNA damage and a dysregulated G2/M DNA damage checkpoint.

Here, we show that in PAD Mb, AIM2 correlates with DNA damage, attenuated DNA damage checkpoint protein expression, and diminished CDC2 responsiveness to BI2536. Thus, AIM2 may promote pyroptosis in the setting of defective DNA damage mechanisms that would otherwise prompt apoptosis. Whether these pathways are reversed by revascularization is a topic of further study.