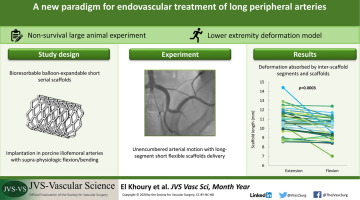 Symptomatic femoropopliteal occlusive disease has been increasingly treated using endovascular methods. However, restenosis, especially after implantation of permanent metallic stents, has remained common. To date, resorbable scaffolds have failed to achieve sufficient radial strength to enable the successful treatment of long, mobile, peripheral arteries. In the present nonsurvival, large animal experiment, a novel device consisting of multiple, short, serial, balloon-expandable, bioresorbable scaffolds was deployed in arteries subjected to supraphysiologic deformation. Compared with native vessels, the scaffolded arteries continued to bend (113° ± 19° vs 110° ± 20°; P = .10) and shorten (15% ± 15% vs 20% ± 14%; P = .16), unencumbered by the placement of the investigational device. The mean luminal diameter of the scaffolded arteries was preserved without kinks or occlusions in exaggerated flexion (4.7 ± 0.7 vs 4.7 ± 0.5 mm in extension vs flexion; P = .80). Arterial deformation was borne by shortening of the interscaffold spaces (2.2 ± 0.8 mm vs 1.9 ± 0.7 mm in extension vs flexion; P < .01) and the scaffolds themselves (10.7 ± 1.4 mm vs 9.9 ± 1.1 mm in extension vs flexion; P < .01). The results from the present study challenge the perceived limitations of balloon-expandable devices implanted in peripheral mobile arteries. We have presented a bioresorbable scaffold that combines sufficient radial strength to preserve the mean luminal diameter with movement and the flexibility to accommodate femoropopliteal deformation.

In the present study, we have described a novel treatment paradigm for femoropopliteal arterial occlusive disease using bioresorbable scaffolds. The balloon-expandable nature and material properties of the polylactide-based scaffolds combined with the short and segmented configuration provided the radial force to resist the physiologic mechanical deformation of the lower extremity artery while accompanying its natural motion. In the present study an acute animal model was tested, and the experimental device is now undergoing a first-in-human clinical trial (ClinicalTrials.gov identifier, NCT04584632).

In the present nonsurvival animal study, experimental devices were serially implanted into the hindlimb arteries of large mammals that were subjected to exaggerated flexion before and after device deployment. Quantitative assessments of the arterial diameter, deformation, and device apposition were performed. Overall device integrity was verified immediately after sacrifice.

The Efemoral device (Efemoral Medical, Inc, Los Altos, CA) is a novel, balloon-expandable, resorbable scaffold specifically designed for femoropopliteal percutaneous intervention. It consists of small, independent, 10-mm polylactide-based stents serially mounted on a 60-mm angioplasty balloon (Fig 1). The purpose of the interscaffold space is to allow for the artery to bend and twist unencumbered during movement. In the present preclinical study, each device was configured with two scaffolds crimped onto a balloon (Fig 2). The balloons were subsequently deployed in series to allow for long-segment artery scaffolding.

All animal operations were performed in a facility compliant with 21 Code of Federal Regulations Part 58 (Food and Drug Administration) Good Laboratory Practice for Nonclinical Laboratory Studies (AccelLAB Inc, Boisbriand, Quebec, Canada). The Comité Institutionnel de Protection des Animaux d’AccelLAB (the test facility's institutional animal care and use committee) reviewed and approved the protocol. The test facility is accredited by both the Association for Assessment and Accreditation of Laboratory Animal Care and the Canadian Council on Animal Care.
Peripheral contrast angiography was performed in four female Yorkshire-Landrace pigs weighing 25 to 35 kg. After the induction of general anesthesia, intubation, and mechanical ventilation, the carotid artery was surgically exposed with the pig in dorsal recumbency. A sheath was inserted into the common carotid artery under direct vision and advanced to the aortic bifurcation using fluoroscopy. Heparin was administered to achieve an activated clotting time >300 seconds. Nitroglycerin boluses were administered to mitigate secondary arterial vasospasm.
Anteroposterior angiographic images were obtained with the pig in the neutral position and the hindlimb naturally extended and were repeated following manual, exaggerated hindlimb flexion.
19
An animal model of human peripheral arterial bending and deformation.
J Surg Res. 2019; 241: 240-246
After identification and flexion angiography of the native arteries, the scaffolds were deployed into the porcine bilateral iliofemoral arteries using slow balloon inflation necessary to achieve complete wall apposition. Angiography was then repeated with the stented hindlimb in both extension and exaggerated flexion. Repeated extension–flexion cycles were not performed in our acute animal model. Intraluminal scaffold imaging was performed using optimal coherence tomography (Illumien Optis Imaging System; Abbott Laboratories, Abbott Park, IL).
Immediately after device implantation and angiography, the pigs were sacrificed, and the scaffolded arteries were excised, treated with graded alcohol, and scanned using the Nikon XT H 225 microcomputed tomography system (Nikon, Tokyo, Japan).

Retrospective quantitative vascular analysis was used to assess the deformation of the arteries, scaffolds, and interscaffold segments. The measurements included the diameter and length of the scaffolds, intervening spaces between scaffolds, and proximal and distal arterial margins. The diameters are reported as the mean luminal diameter (meanD). Axial compression (expressed as a percentage) was defined as the difference between the arterial target segment lengths in the neutral, extended position minus the length in the flexed position divided by length in the neutral position. The bend angle (expressed in degrees) was measured using planimetry, defined as the approximate angle between the proximal and distal border of the sample target arterial segment.
19
An animal model of human peripheral arterial bending and deformation.
J Surg Res. 2019; 241: 240-246

Passive hindlimb flexion produced profound and reproducible native arterial deformation, as expected (quantitative vascular analysis revealed a 110° ± 20° bending and 20% ± 14% axial compression). Despite its deformation, the meanD was reliably preserved, without kinking (4.7 ± 0.4 mm in extension vs 5.0 ± 0.2 mm in flexion; P = .16).

A total of 38 resorbable scaffolds were implanted in eight iliofemoral arteries in four pigs. The devices were implanted in a configuration of two serial scaffolds in two arteries, four scaffolds in two arteries, six scaffolds in three arteries, and eight scaffolds in one artery. The total scaffolded arterial length ranged from 32 to 97 mm.
After scaffold implantation, passive hindlimb flexion produced patterns of profound deformation similar to those observed in the native arteries (bending, 113° ± 19°; compression, 15% ± 15%; P = .16). Despite accommodating multiple, rigid scaffolds, all arteries remained widely patent without kinking or luminal narrowing, even in extreme flexion (meanD, 4.8 ± 0.3 mm in extension vs 4.7 ± 0.3 mm in flexion; P = .80). We found no evidence of crushing, crimping, or compression in any scaffolded vessel, including the artery treated with a “full scaffold jacket” of eight stents traversing a total length of 10 cm (Fig 3).
Quantitative analysis of the individual scaffolds and interscaffold spaces revealed that the deformation of arterial flexion was borne by both segments (Fig 4). We found significant shortening of the spaces between the scaffolds (n = 30 spaces; mean length in extension, 2.2 ± 08 mm; mean length in flexion, 1.9 ± 0.7 mm; P < .01) and of the axially flexible scaffolds themselves (n = 38 scaffolds; mean length in extension, 10.7 ± 1.4 mm; mean length in flexion, 9.9 ± 1.1 mm; P < .01).

The limitations of the present study included the sample size and the absence of atherosclerosis in the chosen animal model. The deployment of balloon-expandable plastic stents in heavily diseased human peripheral arteries could produce different results. Also, iterative mechanical stress related to hindlimb repeated flexion was not assessed in the present acute preclinical study nor was the histologic vascular response over time.

In the present study, we found that experimental peripheral arteries can be acutely treated with multiple, short, balloon-expandable, bioresorbable scaffolds without luminal compromise. Subsequent studies will focus on the chronic vascular response to this interventional strategy. An acute animal model was tested in the present study, and the experimental device is now undergoing a first-in-human clinical trial (ClinicalTrials.gov identifier, NCT04584632).

The present study was partially funded by the National Institutes of Health (grant 1-R43-HL145671).

The editors and reviewers of this article have no relevant financial relationships to disclose per the JVS-Vascular Science policy that requires reviewers to decline review of any manuscript for which they may have a conflict of interest.

© 2022 by the Society for Vascular Surgery. Published by Elsevier Inc.