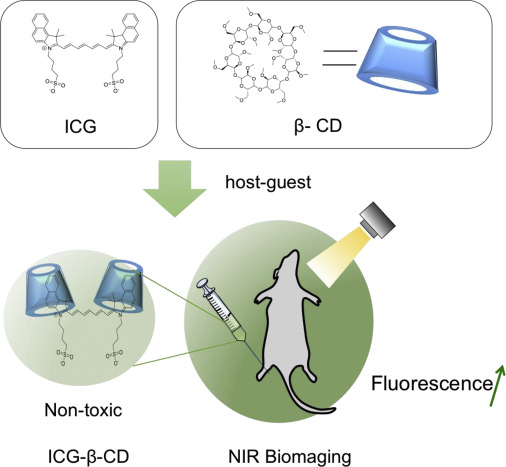 Fluorescence contrast technology using indocyanine green (ICG) could be useful for the rapid, dynamic, and objective assessment of blood vessels and the surrounding tissues when combined with near-infrared (NIR) imaging. Although ICG is a clinically available NIR fluorescence imaging probe, it can easily aggregate and is, thus, unstable. In the present study, we examined the efficacy of a host–guest ICG–β-cyclodextrin (CD) complex, which is used in pharmaceutics to improve the water solubility, stability, and bioavailability of hydrophobic molecules, for NIR imaging after hind footpad administration in a rat model.

We successfully prepared the ICG-β-CD complex. Compared with ICG, in vivo experiments showed that this complex had reduced absorbance at 710 nm and increased absorbance at 780 nm, indicating that it could prevent the dimeric aggregation of ICG, and a significantly higher fluorescence intensity at 730 nm excitation. After injection of 1.25 mg/mL of ICG or ICG-β-CD complex solutions into the rat hind footpad, fluorescent NIR lymphatic images were observed with both imaging systems. During the 12-hour observation period, the signal background ratio of ICG-β-CD showed a greater acute increase and a higher signal background ratio compared with ICG. The signal background ratio of ICG-β-CD was 125 to 100 from 260 to 540 minutes. These in vivo data suggest that ICG-β-CD has greater diffusion from the injection site and faster transport to the lymphatic system compared with ICG.

The lymphatic system plays a crucial role in maintaining tissue fluid homeostasis by draining protein-rich fluid from the perivascular interstitial spaces back into the circulation. The lymphatic system also plays a variety of roles in the progression of some peripheral vascular diseases, including venous leg ulcers, atherosclerotic vascular disease, and severe foot infection. Understanding the dynamic changes of the lymphatic fluid is indispensable for a variety of clinical situations and research areas. We investigated the potential feasibility of the indocyanine green–β-cyclodextrin complex in clinical applications using clinically available near-infrared fluorescence imaging equipment.

Synthesis of the ICG-β-CD complex

The ICG-β-CD complex was prepared using a host–guest self-assembly process.
14
Indocyanine green and methyl-β-cyclodextrin complex for enhanced photothermal cancer therapy.
Biomedicines. 2020; 8: 476
,
15
Cyclodextrin based host-guest complexes loaded with regorafenib for colorectal cancer treatment.
Nat Commun. 2021; 12: 759
ICG (1.0 mg) and β-CD (3.0 mg) were completely dissolved in 0.5 mL of methanol and 1.5 mL of deionized water, respectively. The ICG solution was then added to the β-CD aqueous solution in drops to obtain the ICG-β-CD complex, followed by stirring for >6 hours. The mixture was further dialyzed against deionized water using a 1-kDa molecular weight cutoff membrane for 3 days to remove free ICG, β-CD monomers, and residual methanol.

Optical properties of ICG and the ICG-β-CD complex

Our local animal ethics committee approved the animal study protocol, which followed the regulations for animal experiments of the Chinese PLA General Hospital. A total of 24 Sprague-Dawley male rats (age, 12 weeks; mean weight, 390 g) were housed in a temperature- and humidity-controlled environment with free access to food and water until the experiments. All surgical procedures and imaging studies were performed with continuous isoflurane inhalation anesthesia using a small animal anesthesia machine. During the anesthesia periods, the rats were placed on a heating pad maintained at 32°C and were administered lactated Ringer’s solution (10 mL/kg, intraperitoneal injection) at 1- to 2-hour intervals.
The in vivo experiments in the present study consisted of two parts (Fig 2). The first part involved imaging using the IVIS spectrum system. With the rat in the supine position, the femoral vessel and accompanying lymphatics were exposed via a longitudinal incision from the medial thigh to the groin.
12
Near-infrared indocyanine dye permits real-time characterization of both venous and lymphatic circulation.
J Biomed Opt. 2016; 21: 86009
ICG or ICG-β-CD solution (1.25 mg/mL; 0.2 mL) were subcutaneously injected into the hind footpad using a 32-gauge needle. After injection, the rats were observed every 5 minutes for 60 minutes. The second part involved imaging using the clinical DIGI-MIH-001 system. The hair was removed from the lower abdomen and hindlimb area of the rats, and the imaging was performed without a skin incision. The rats were injected as described. To assess the clearance of ICG and the ICG-β-CD complex from the injection site, the right ankle was selected as the region of interest to measure the signal background ratio (SBR). NIR imaging was performed every 5 minutes for the first 60 minutes, every 15 minutes for the next 3 hours, and every 30 minutes for the final 8 hours.
All data are presented as the mean ± standard deviation. All statistical analyses were performed using GraphPad Prism, version 6 (GraphPad Software, Inc, La Jolla, CA). A P value < .05 was considered statistically significant. For two groups with repeated observations over time, two-way repeated measures analysis of variance with Sidak’s multiple comparisons test was initially performed. A potential nonlinear association between the time and SBR was explored using curve fitting with a third-order polynomial equation (cubic) and evaluated using the extra-sum-of-squares F test. Mixed models with the interaction of time and a grouping factor were used to compare the change in SBR over time between the two groups, which were implemented in the statistical software packages R (R Foundation for Statistical Computing, Vienna, Austria; available at: http://www.R-project.org) and EmpowerStats (X&Y Solution, Inc, Boston, MA; available at: http://www.empowerstats.com).

The ICG-β-CD complex demonstrated different in vivo features compared with ICG, with faster lymphatic transport and faster removal at the subcutaneous injection site. The NIR images of the deep lymphatic vessels were visualized using DIGI-MIH-001 at 1 hour after injection of ICG or the ICG-β-CD complex into the right hind footpad (Fig 6).
The relationships of SBR over time for the ICG and ICG-β-CD groups were nonlinear (nonlinear vs linear model, P < .01 for both groups; Fig 7). Two-way repeated measures analysis of variance showed significant differences between the two groups (interaction: time × grouping factor, P < .01). The SBR in the ICG-β-CD group increased rapidly during the initial 4 hours and then remained relatively flat. In contrast, the SBR in the ICG group had increased slowly for the first 8 hours. The change in SBR was significantly greater in the ICG-β-CD group compared with the ICG group from 0 to 6 hours (slope difference, 25.65; standard error, 11.93; P = .03) and at 4 hours (slope difference, 59.95; standard error, 11.93; P < .01) after the footpad injection. These data suggest that the ICG-β-CD complex had faster diffusion properties than ICG after footpad injection.

Author conflict of interest: none.

The editors and reviewers of this article have no relevant financial relationships to disclose per the JVS-Vascular Science policy that requires reviewers to decline review of any manuscript for which they may have a conflict of interest.

© 2022 by the Society for Vascular Surgery. Published by Elsevier Inc.